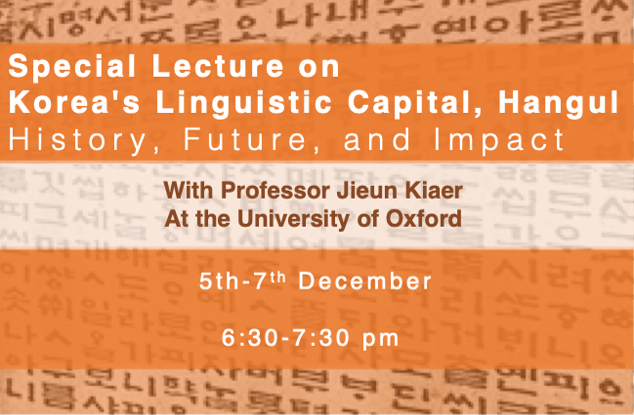 We are delighted to inform you that we have organised a series of Korean special webinar which will be given by the Professor J Kiaer from University of Oxford from the 5th until 7th December 2022 at 6.30pm via Zoom.

The topic of the lectures would be "Korea's Linguistic Capital, Hangul".

"Despite the increasing academic popularity of East Asian languages, history and cultures in Western countries, there still remains a significant lack of English-language scholarship relating to the linguistic and cultural history of the Korean alphabet, Hangul or Hangeul. These talks aim to redress this imbalance, making historic observations before and after the advent of Hangeul in order to investigate its impact and cultural significance. We present our discussion based on historical records written in the original scripts, making our work novel in this regard. In addition to linguistic features, in these talks we also give primacy to the often- ignored socio-cultural impact of the alphabet system."

Registration is free of charge and available until 5 December 2022 via the following link:

Test of Proficiency in Korea (TOPIK)